It only takes a few seconds to appear on your screen.  You can then contact them directly to discuss your requirements in more detail and book an inspection date.

This is a completely FREE service to use. 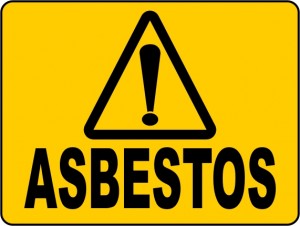 Should I be worried?

The cost of asbestos removal work depends on a number of factors. Initial guideline prices should give you a rough idea of costs before booking your asbestos survey. The survey will allow the contractor to identify and advise you on any necessary works and provide accurate costings.

In some cases relatively low risk asbestos-based materials (such as asbestos cement sheeting) can be safely contained rather than removed, saving a lot of expense.

Asbestos – should I be worried?

This article by RightSurvey founder chartered surveyor Ian Rock was published in The Guardian newpaper and gives a useful overview of asbestos in the home.

What if you find asbestos in your property?

Asbestos Containing Materials (ACMs) are surprisingly common in our homes, most often in the form of sheeting applied to areas like eaves soffits, and corrugated asbestos cement-fibre board to shed roofs etc.

So what are the health risks?  It was suspected as far back as 1918 that inhalation of asbestos fibres caused pulmonary lung disease and breathing problems, with the potential to eventually cause cancers such as mesothelioma. Yet it wasn’t until as late as 1985 that the more dangerous forms of asbestos were banned in the UK. The manufacture and supply of all types of ACMs was finally outlawed by the year 2000.

But not all ACMs are equally dangerous. The most hazardous type are classed as ‘friable’ which means they can easily be crumbled or reduced to powder by touch, releasing harmful fibres into the air, like some older types of insulation and pipe lagging.  Asbestos cement boards and similar materials used in housing are classed as ‘non-friable’ because the asbestos is bonded within the material. As long as the asbestos is held in place by the cement, and the material is not damaged, it can normally be left in place.  The risk comes about when it gets damaged or degrades and the cement starts to weaken, potentially releasing fibres into the air.

So in most cases Surveyors do not normally consider this to be an immediate concern. But it’s not always obvious that materials – such as roof tiles – contain asbestos. To be certain you may need a specialist survey.

The cost of Asbestos Surveys varies greatly and depends on a number of factors: the size of the property, the number of potential asbestos containing materials (ACM) and the number (if any) of test samples required.
Complete the form above and you will instantly receive initial estimates from a number of Asbestos Surveyors with full contact details. You can then contact them directly and discuss your requirement in detail.

The estimates you will receive are guideline prices for the Asbestos Surveyor to visit your property and carry out an initial investigation. Having done the investigation, the Surveyor will then be able to provide a report outlining further steps that need to be considered and an give you an indication of any further costs. Much will depend on the type of survey required. 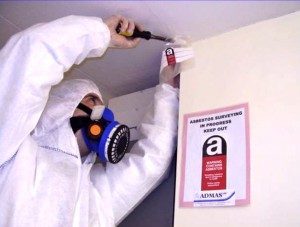 The 2 types of surveys

1/   Management Survey carried out as part of risk control in an occupied building. This was previously called a Type 1 or Type 2 Survey.

2/   Demolition/Refurbishment Survey carried out prior to work starting so the asbestos can first be safely removed.  This was previously called a Type 3 Survey. This survey is destructive as even hidden asbestos containing materials must be identified.

A Management Survey (# 1 above) will not provide a list of all asbestos containing materials, just those which present a risk to people in the building during normal occupancy. If building work or demolition is planned a fully intrusive survey will be needed. A competent asbestos survey will provide further advice.

Surveyors carrying out inspections will normally have the qualifications BOHS P402 and P405. 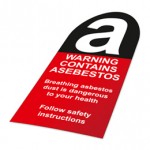 Asbestos is a mineral-based material extracted from serpentinite rock.  There are 6 types of asbestos, but only 3 have been widely used in building materials:-

Blue asbestos is generally regarded as the most dangerous form, followed by brown and then white. The white variety was the type predominantly used in the construction industry, mostly in the form of sheets of cement fibre. This was a durable, fire-resistant, lightweight material made by mixing asbestos with Portland cement (with up to 10% asbestos in the mix). If the fibres are well bonded the material is of a lower risk as fibres are less likely to be released and become airborne.

In most cases there is no cause for alarm with asbestos-based materials in homes. The main risk is where it is inhaled as a fine dust, so it’s essential that these materials are never be sawn, sanded, drilled, brushed or disturbed in any way that might result in the production of dust or fibres. Provided asbestos is not disturbed, the likelihood of major problems developing is very much reduced.

Most people know what a corrugated asbestos garage roof looks like. But very few home owners realise that asbestos can also be found in quite a diverse range of relatively common building products. Some of these are as follows:

The Asbestos at Work Regulations 2002 has meant that owners of commercial and communal premises (eg blocks of flats) must make have a plan to manage asbestos in their property. They must ensure that any asbestos present is not disturbed in a way that may result in a hazard to health.

The removal of asbestos from a building can be a complex and costly process and should only be carried out by a licensed contractor. They will ensure that the removal is carried out safely and that the asbestos, once removed, is taken to a licensed disposal site where it will not cause a hazard to other people.

Carrying out work on a DIY basis is generally best avoided. However there’s no legal restriction to disposing of asbestos cement-fibre boards etc yourself. Some Council tips accept ACMs, and some Councils even arrange collections for a fee.

Materials should be placed in robust plastic rubble bags but it’s important to avoid breaking the stuff into smaller pieces as this can create hazardous dust particles.  If it does break, spray it with water to minimise the escape of airborne fibres. In all cases it’s essential to wear the right PPE  – gloves, dust masks, safety goggles and suitable protective clothing.

More information about asbestos surveys can be found in the HSE document; Surveying, sampling and assessment of asbestos-containing materials, MDHS-100. A useful website is  www.hse.gov.uk/asbestos.

The following article was written by John Richards, Director at Thames Laboratories:-

The combined death toll from asbestos is over 5,000 a year in the UK. More people die from mesothelioma than in road accidents – the highest level in the world. Here are the risks:

The material was only prohibited in the UK in late 1999, meaning there is over a century of use.  From a regulatory perspective all buildings built prior to 2000 must therefore be regarded as potentially asbestos containing and managed in accordance with a stringent list of requirements to ensure that any risk from asbestos is effectively controlled.  It is generally acknowledged that over 75% of the UK’s schools contain asbestos.

Asbestosis is a chronic disease associated with high levels of exposure, typically in the processing / manufacturing or handling industries. Deaths associated with asbestosis are slowly declining and are currently fewer than 500 per annum.  But it is estimated that 2,000 deaths occur annually due to asbestos-related lung cancers.

Over the past 20 years, mesothelioma has emerged as a main concern, affecting not only those in occupational contact but those who have been exposed to low levels of asbestos. The number of deaths has increased significantly from 158 in 1968 to 2,535 in 2012 and the figure is still rising.

The UK has the unenviable title of having the highest levels of mesothelioma in the world, losing more people to the disease each year than are killed in road accidents.

The combined death toll from asbestosis, asbestos lung-related lung cancers and mesothelioma currently exceeds 5,000 deaths per annum, despite research suggesting the peak in deaths should already have occurred.

Asbestos fibres are bio-persistent. The properties that led to the material’s use also prevent it being broken down by the body’s defence mechanisms for long periods of time. Emerging theories suggest that long-term exposure to very low levels of asbestos may present the same risk as short duration high-level exposure due to bio-persistency. This may best be exemplified by the increasing numbers of teachers contracting mesothelioma.

Some products contain high levels of fibres such as lagging and sprayed asbestos, while others have a lower content such as floor tiles and textured finishes.

In poorly maintained buildings, asbestos materials will degrade and hence may release fibres. Understanding this risk is complex. A degraded material with high fibre content such as sprayed asbestos presents a high risk, but its location is a major factor in the outcome.

In a plant room, exposure risk to general building users will be minimal, however if the location is a return air plenum the number of people affected could be considerable.

In friable material, such as sprayed asbestos or asbestos insulation and asbestos insulation board, even minor disturbance can result in the significant release of fibres. These materials would generally be regarded as high risk and their presence can have implications on the day-to-day management of properties.

Asbestos cement sheets in good condition would generally be regarded as low risk. If the material can be removed whole this would not affect its friability because the fibres are bound within the matrix.

If, however, the sheets will be damaged during removal then the friability of the material and the level of control needed will increase. The same applies if the sheets are weathered and degraded.

Three risk classifications
1. Where work involves the highest risk, most friable materials, only contractors licensed by the Health and Safety Executive can be used, with all works notified to the appropriate enforcing authority.

2. For low-risk items that can be removed intact, the only requirement is for the use of appropriately trained and insured contractors.

3. The middle ground of materials where the friability is moderate and the levels of fibre release will be increased by the works are termed notifiable non-licensed works. The requirements for control sit between licensed and non-licensed work but the contractor must notify these works.

The future
The European Parliament has begun discussions on establishing an acceptable environmental level for asbestos exposure. The proposed threshold will apply to all buildings and is considerably lower than the level currently deemed acceptable. The implication is that such a limit may have a direct impact on properties where higher risk friable materials are present.

SCROLL UP for quotes / contacts

What’s the right survey for my property?