Simply fill in a few brief details below to compare prices for an electrical inspection test report on your property’s wiring and electrical system.

It only takes a few seconds for prices and local contact details to appear on your screen. You can then contact them directly to discuss your requirements in more detail and book an appointment.

This is a completely FREE service.

What is a test report?

What is a ‘registered electrician’?

What is a test report – and when do I need one?

There are a number of reasons for commissioning an electrical inspection and test. If you’re a landlord you will need to comply with the legal requirement for let dwellings to have the electrics tested every 5 years.  The type of test required is an ‘Electrical Installation Condition Report’ (EICR). 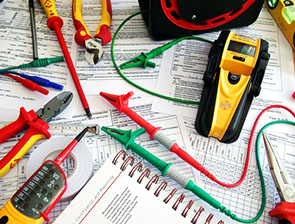 Home buyers are often advised in surveys to have the electrics tested. In fact, in their reports surveyors are required to give electrical systems a RED condition rating  (which means ‘serious or urgent’) even if the fittings look OK.

This is because even where the electrics appear relatively modern there could be lethal DIY botches hidden away behind the scenes. An EICR test will confirm that the electrics are safe (Electrical Installation Condition Report).

However, there is no requirement for existing electrical systems to be upgraded to comply with the latest newbuild standards.  Wiring regulations are updated with dizzying frequency so even a fairly modern systems are unlikely to fully comply, and is not necessarily a problem.

If you’re buying an older property with old wiring it’s essential to get it professionally checked to confirm whether the building needs a complete rewire or only minor updating. In the case of obviously very old wiring the electrician would instead provide a quote for the cost of rewiring. As always, it’s best to get 3 quotes so you don’t pay over the odds.

Even where the original electrical system is in sound condition overall it’s normally advisable to carry out some localised updating so it complies with modern safety regulations. The areas where safety standards have improved most in recent years relate to kitchens and bathrooms. For example bathroom lights need to have a safety rating of IP44 (or IP65 near shower cubicles or baths) and switches should be located outside bathroom doors.

For example it’s a good idea to install extractor fans in kitchens, bathrooms and utility rooms to remove stale, humid air, as well as installing smoke alarms to circulation areas.  High demand areas such as kitchens should have their own dedicated circuits. Electric cookers, showers and immersion heaters also require separate fused circuits, and cables supplying outdoors should have a subsidiary consumer unit.

Part P ensures all major electrical work undertaken within a dwelling (including the garden) is carried out safely by a qualified electrician and that the Local Authority Building Control department is notified of this work. This is why major electrical work is refered to as ‘notifiable’ work.

‘Approved electricians’ can ‘self-certify’ that their work complies, and the organisations above will issue the certificate to you and notify Building Control.

‘Notifiable work’  covers major things like fitting complete new circuits, replacing consumer units or any alteration work to existing circuits in ‘special locations’ such as bathrooms. However there are various ‘non-notifiable’ smaller works that homeowners are allowed to carry out independently, such as like-for-like replacement of switches and light fittings,  or adding power points to existing circuits or extending them (e.g. adding a spur).

By law, all major electrical work (known a ‘notifiable’ work) must be carried out by electricians registered as ‘competent persons’ who have the necessary knowledge, skill and experience. These ‘registered electricians’ must ensure their work complies with UK national standard (known as BS 7671 Requirements for Electrical Installations).

Electricians registered as competent persons can self-certify that their installations comply with Building Regulations. They must be affiliated to a body that gives them the necessary ‘registered installer’ status allowing them to issue compliance certificates (such as NICEIC, ELECSA, ECA and NAPIT).

Upon completion it is a legal requirement for the electrician to test the system and hand over a signed BS 7671 electrical safety certificate to confirm that the installation has been designed, constructed, inspected and tested, in accordance with the standards.

By filling in the above form you will be given contact details for several professional electricians covering your area so you can get in touch, confirm a price, and get the job booked as quickly as possible.

What’s the right survey for my property?