Some types of homes are classed as ‘hard to mortgage properties’ because most lenders are likely to decline them. At best they may make the mortgage offer subject to getting a structural engineer’s report or a ‘full structural’ Building Survey.

At Rightsurvey we’ve identified the main ones that can cause problems, listed below.  All lenders have ‘lending policies’ which effectively blacklist some types of construction. This can make it hard to find a bank or building society prepared to give you a mortgage. If the price is a suspiciously cheap, this may be why.

Banks normally appoint a surveyor-valuer to visit the property that you’ve agreed to buy to carry out a mortgage valuation for them. This will flag up any types of property that are not acceptable for lending.

If the home you want to buy is on the list below it’s important to first run this past your mortgage broker or lender. This could save having to fork out for abortive valuer’s fees later on.

But there’s another catch: even if you succeed in getting a mortgage now, when you want to move home in future and sell the property, the person you’re selling to could similarly struggle to raise a mortgage.

By then it could actually be more difficult if, in the meantime, more lenders have jumped on the bandwagon and blacklisted your type of property. In the worst case scenario the only people able to buy non-mortgageable properties would be cash buyers, who would expect a hefty discount.

Different lenders have different red lines but the following types of property are best avoided:-

Many ex-Local Authority houses (mostly semi-detached) built from the 1940s to the 1960s were of Pre Reinforced Concrete (PRC) construction. Under the Housing Act 1985 many such homes are today designated as ‘defective’.

Some types can be repaired making them acceptable for lending, but for semi-detached houses both pairs need to be upgraded to a certifiable standard (such as Non-Traditional Homes Appraisal Scheme or PRC Homes Ltd Repair Scheme).

Some Local Authority houses were of steel frame construction. These can often be upgraded but are not acceptable if unmodernised.

Houses or flats with walls of poured concrete construction, such as ‘Wimpey No Fines’ and ‘Laing Easiform’ are acceptable to most mortgage lenders – but not all.

Some smaller Victorian terraced houses have the rear addition built with thin brickwork.  Traditional solid brick walls in older buildings are usually 230mm thick (the length of a brick) so avoid homes with thinner walls (approx 115mm – the width of a brick). Such walls are usually rendered. It’s not unknown for end terrace houses to have the entire side gable wall (aka the flank wall) built of ‘single skin’ brick! This is either because they were constructed by dodgy Victorian ‘jerry builders’ or maybe bomb damage during the war meant the original mid-terrace house became an end terrace (although the party walls between terraced houses also shouldn’t be single skin!). Where any original chimney breasts and internal walls that used to buttress such thin walls have been removed this can be a recipe for disaster.

Most mortgage lenders will refuse to lend especially if the part of the building is 2 or more storeys high. This means the market value of the property will be significantly lower if buyers can’t easily get mortgages. Some banks may only lend if you get a structural engineer’s report and upgrade the thin walls (with Building Regulations consent) – both to improve structural support, deal with higher risks of damp and to improve heat loss by adding insulation. Upgrading may require building a new inner leaf (or new outer skin) in lighweight blockwork or possibly of insulated studwork with a suitable damp proofing barrier included.

Many modern timber frame houses and flats have the inner leaf of the main walls made from timber panel construction. The visible facing walls (the outer leaf) are normally of brick or masonry so they look almost identical to standard masonry walls. These are regarded as ‘conventional’ construction unless built prior to 1970.

Also avoid homes where the outer leaf is not built from masonry, such as timber shiplap cladding (although partial timber cladding, eg to the parts of first floor, should be acceptable).

Another no-no is where the cavities in timber frame buildings have been insulated retrospectively.

Traditional oak or elm framed houses are acceptable to most lenders but not all.

Many homes have partial flat roofs to dormers, porches, bays etc. But where more than 50% of the main roof is classed as flat (ie less than about 12 degrees pitch) some lenders may raise concerns.

– Some types of flats

Flats above shops, especially fast food takeaways, pubs or dry cleaners, are not usually acceptable. But recently relaxed planning rules can allow shops to change use without planning consent which could potentially slash the value of flats over shops of all types.

Banks increasingly will not lend on flats with remaining lease terms less than about 85 years. The cost of increasing the lease term can sometimes be prohibitive, so check this before buying. Also enquire whether it’s possible to buy the Freehold jointly with the other lessees in the block – get the response confirmed in writing!

Flats are normally leasehold and you expect there to be an annual ground rent and service charge to pay. Depending on the price and location of the property problems can occur where ground rents are very high (more than around £200 pa) and especially where they are set to double every 5 or 10 years, rather than simply increasing in line with inflation. This soon becomes a major financial burden.

Recently some major housebuilders like Taylor Wimpey sold new houses on a leasehold basis (houses are normally Freehold) with very high doubling ground rents. Some of these properties’ Freeholds were later sold by the developers to unscrupulous offshore ‘investors’ who proceeded to rack up additional charges making the homes virtually unsellable.

Where major structural work such as underpinning has been carried out it can leave a stigma. Some lenders will decline underpinned buildings and buildings insurance can be hard to obtain.

Building materials and methods such as SIPS, ICFs and modern steel frame (pre 1990) are acceptable to some lenders but not all. 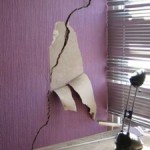