Buying A Flat Over A Commercial Premises

by Ian | Oct 24, 2018 | Buying a flat above a commercial premises, Finding a property, Finding the right property 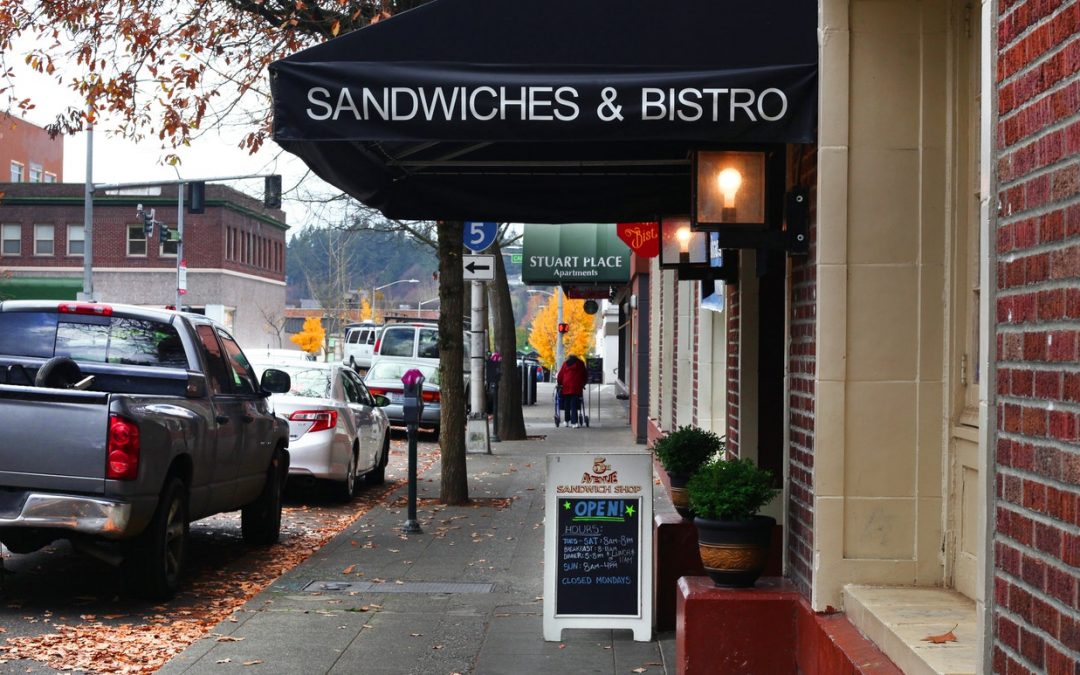 If you’re on a tight budget, buying a flat above a parade of shops should make your money go further.

Depending on the type of business underneath, you can save between 10 and 20 per cent of the price of an equivalent property on a local residential street. You’re likely to get a lot more property for your money as well, as such flats are often generously proportioned and spacious, perhaps extending over first and second floors.

Flats above shops are popular with investors because, although cheaper to buy, being located above a business should not significantly lower the rental value. Tenants on six-monthly or yearly contracts are not likely to be as bothered as owner-occupiers about what lies beneath them.

One thing to bear in mind is that service charges cover the whole building, shops and all, and are normally much higher than on a purely residential property, so you would hope that the leaseholder of the shop would contribute a larger share. In reality there is no standard rule as to who pays what, and you could get lumbered for big maintenance bills for large flat roofs and shared open walkways etc.

Obviously, one of the first questions to ask is ‘What’s downstairs?’ A property above a bookshop would be more acceptable than living over a restaurant or bar, and prices reflect this.

But uses can change, so it’s essential to check with the local authority planners and the freeholder that there are no plans for the business to change. But some use changes are permitted without planning consent (see Home-moving.co.uk)

Having a bar or restaurant down below can incur much higher building insurance because of fire and security risks, which means your premium may be higher. Often the quality of sound and fire insulation separating the residential area from the shop below can be poor, making some types of activities particularly intrusive.

Some mortgage lenders won’t consider properties located above a business.

Others will pay careful attention to the mortgage valuer’s report, and will draw the line at some shop uses; things like dry-cleaners, takeaways and bars are not popular – in fact anything with fumes, smells and the risk of disturbance. In some cases, lenders may also restrict the amount they will lend with a lower LTV (loan-to-value) so you may need a larger deposit.

The other downside is that, unlike conventional flats, you may not qualify to buy the freehold (under enfranchisement legislation). On a mixed residential and retail/commercial building, a third-party investor usually owns the freehold.

Two young men bought a flat above a fried chicken takeaway shop in Peckham, South London. As first-time buyers they thought they’d picked up a bargain. The estate agent who sold it to them says that ‘Initially they were quite blasé about it.’ But later they came to regret their purchase: ‘Their floors would heat up every day because of the cooking downstairs and the smell of chicken filled their home. They got the flat cheap, but had had enough after six months and sold up.’

There’s a lot more to buying a flat that perusing ancient lease documents. So if you risk buying without a survey, you could be in for some nasty surprises.

These are the sort of points a surveyor can comment on:-

Mortgage lenders always seem to be keen to distinguish between flats that were originally purpose-built and those that have been subsequently converted.

Many grand old houses have been divided up into self-contained apartments, or flats hewn from former warehouses or office blocks.

Why do lenders need to know this?

Possibly because in the 1970s and 1980s a lot of dodgy conversions were carried out, with minimal attention to such matters as sound insulation and fire safety. Purpose-built blocks are also more likely to be better run and maintained and have correctly drafted leases (but not always).

Sound insulation between flats has been a requirement since the 1980s, and today is taken very seriously indeed, being subject to scrupulous inspection and even requiring pressure testing. But as noted above, older converted flats often managed to bypass the rules, and may have a perilous lack of insulation, in which case some expensive upgrading work may be necessary.

Sound insulation to an existing building can be applied in two main ways. To deaden sound transmission for the flat above, a new ‘suspended ceiling’ is often constructed about 150–200mm below the original ceiling.

This can be a timber framework employing new joists run from the walls, leaving a clear void between the old and new ceilings, which is stuffed with sound deadening mineral wool insulation. A thick new double layer of special acoustic plasterboard finished with a plaster skim can create a fresh and fire-resistant new ceiling.

Recessed lights should be avoided, as cutting holes obviously won’t do a lot for insulation performance. The purpose of the air gap is to cut ‘impact sound’ – ie people knocking, banging or just walking directly on the floor surface.

If access is possible, additional mineral wool insulation can be stuffed between the existing joists to the floor above. And ideally (again subject to arranging access) you might be able to persuade the owner of the upstairs flat to install a ‘floating floor’ laid over the floor above, with layers of special acoustic boarding sealed at the edges.

This helps absorb vibration and airborne sound, such as shouting and music. Of course, it helps no end if the upstairs flat dwellers have carpeted floors rather than laminate or stripped wood, and don trainers rather than stiletto heels – or if they’ve taken a vow of silence. The same methods can be applied to your floor to insulate sound transmission from below.

Partition walls don’t normally have to cope with impact sound, just airborne noise, and can be lined with insulated acoustic plasterboard.

Fortunately, the necessary fire separation may already have been achieved as a result of the double plasterboarding used to create the sound barrier. Otherwise, lining a wall or ceiling with a 12.5mm fireboard (pink coloured) should do the trick.

All flats above ground level should have fire doors – ie special doors with 30 minutes’ fire resistance. The exception is to bathrooms, unless they contain a boiler. Self-closers may no longer be a technical requirement, but if they’re not installed it’s a wise precaution to make a habit of keeping kitchen and living room doors closed at night, as these are the two areas where fires most commonly break out.

Perhaps most important of all, invest in some decent smoke alarms – they should be wired into the mains and have a battery backup. Be sure to buy those with a cut-out switch in case of false alarms. Position them correctly and they can be a real life-saver.

Lastly, plan your escape route in an emergency. Decide which windows you could safely squeeze through without plummeting to your doom, and keep them unlocked. Consider keeping a foldable escape ladder or rope handy.

Solicitors always need to check that planning consent for ‘change of use’ was obtained for conversion flats. Even more important, you need to check that building regulations were also complied with – and see a completion certificate obtained by the developer to prove compliance.

If consents were not fully complied with, a retrospective application can be made, but this is time-consuming and could reveal problems – such as inadequate sound and fire insulation – or could be refused. Either way, solicitors must check this as early in the process as possible.

If you buy a ground floor flat adjoining the communal entrance lobby, the noise from people coming and going and doors slamming can drive you mad. Conversion flats with thin timber stud partition walls are especially prone to such problems.

On the other hand, well designed ground-floor flats with private gardens can command a premium, although occupants need to be aware of the enhanced risk of security problems and break-ins. At least there will be no noise from the people downstairs (unless there’s a basement).

Top-floor flats aren’t necessarily all plain sailing either. Without a lift, you could risk becoming extremely fit, traipsing up and down the communal stairs each day.

And you need to be very sure where your options lie in relation to escape from fire in an emergency. Check also the quality of insulation in the loft. One good thing is that if there’s a leak from a bathroom, it won’t be you who has to erect an umbrella.

Evidence of leakage is something surveyors check for. Because flats are often designed on a modular basis, with all the flats above and below having their bathrooms and kitchens stacked one above the other, one person’s exuberant bathroom antics can cause a cascade of problems for everyone living underneath.

Are there many rented flats in the block? It’s well known that tenants are sometimes less careful occupiers than owners, and there can be more risk of hazards such as overflowing baths and noise.

Students and rock stars have a reputation for unneighbourliness. Other flat dwellers may have jobs that demand working unsocial hours, so they may want to get some shut-eye when you want to party and vice-versa.

Check that your flat has its own electricity, gas and water meters. Check where the stopcock is that controls your cold water supply. It’s also worth checking whether there’s a communal lobby with access to the main water pipes that supply the flats upstairs (just in case the occupants disappear off on holiday and leave the bath running!).

These days, shared services are rare, but some blocks have old-fashioned communal boilers, and may have water tanks situated remotely from your flat.

Here we come to a potentially highly contentious subject.

How many allocated car spaces does your flat have, if any?

What if you hold a party and have lots of visitors?

Is there a problem with local shoppers or commuters parking there?

Are there any extra charges to pay?

Do the garages have an electricity supply?

You normally expect to pay towards the upkeep of communal areas and gardens in your service charge. But are the communal gardens well maintained? Have any of the ground-floor flat owners illegally fenced-off part of the gardens for their exclusive personal use?

Maybe you have your own private garden with the flat, which may be ‘non-contiguous’, ie on a separate plot some distance away.

There are bargains to be had in this area but take heed of the above advice and avoid any of the pitfalls so many fall foul of.